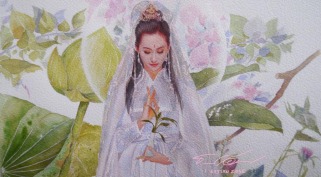 The Bamboo Palace of Kuan Yin is a colossal, genial nation, ruled by perceiving the cries of the world with a fair hand, and renowned for its rampant corporate plagiarism, hatred of cheese, and punitive income tax rates. The compassionate, democratic, cheerful population of 9.814 billion happy beings are free to do what they want with their own bodies, and vote for whomever they like in elections; if they go into business, however, they are regulated to within an inch of their lives.

It is difficult to tell where the omnipresent, socially-minded government stops and the rest of society begins, but it juggles the competing demands of Education, Welfare, and Environment. It meets to discuss matters of state in the capital city of Lotus Sutra. The average income tax rate is 96.5%.

The happy being economy, worth 773 trillion Lotuses a year, is driven almost entirely by government activity, with private enterprise illegal. The industrial sector is solely comprised of the Book Publishing industry. State-owned companies are the norm. Average income is 78,772 Lotuses, and distributed extremely evenly, with practically no difference between the richest and poorest citizens.

Self-driving cars obey the road rules even during emergencies, the state pays for care of easily preventable illnesses, island residents must resort to canoes and sailboats to get to work, and most people suffer from some form of hearing loss. Crime is totally unknown. Kuan Yin's national animal is the White Parrot, which soars majestically through the nation's famously clear skies, and its national religion is East Asian Buddhism.

Kuan Yin is ranked 50,831st in the world and 6th in Taiwan for Most Politically Free, scoring 73.9 on the Diebold Election Inking Scale.