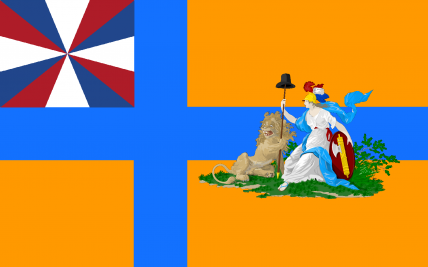 The Theocracy of Konros is a gargantuan, efficient nation, ruled by Cardinal Choid Libibi with an iron fist, and renowned for its rampant corporate plagiarism, fear of technology, and frequent executions. The hard-nosed, hard-working, cynical, humorless population of 14.009 billion Konrosians are ruled by a mostly-benevolent dictator, who grants the populace the freedom to live their own lives but watches carefully for anyone to slip up.

The enormous, corrupt, well-organized government is primarily concerned with Defense, although Industry, Administration, and Healthcare are also considered important, while Welfare and Public Transport receive no funds. It meets to discuss matters of state in the capital city of Arkuz. Citizens pay a flat income tax of 39.5%.

The frighteningly efficient Konrosian economy, worth 948 trillion Rakys a year, is highly specialized and mostly comprised of black market activity, especially in Uranium Mining, Arms Manufacturing, and Door-to-door Insurance Sales. State-owned companies are reasonably common. Average income is 67,720 Rakys, with the richest citizens earning 9.4 times as much as the poorest.

There is a growing belief that mothers love their children more than fathers, customs officials often double as wedding officiants, machine-peeled candied grapes come in individual packaging for the busy commuter, and parachutes are considered optional with the newest line of jet fighters. Crime, especially youth-related, is all-pervasive, perhaps because of the country's complete lack of prisons. Konros's national animal is the python, which teeters on the brink of extinction due to widespread deforestation, and its national religion is the Church of Konros.

Konros is ranked 245,780th in the world and 331st in The Free Nations Region for Least Corrupt Governments, with 58.45 percentage of bribes refused.