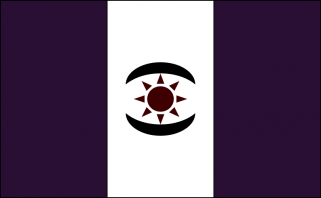 The Special Fiefdom of Kohr is a gargantuan, cultured nation, ruled by Benevolent Overlord F'Earstel with an iron fist, and notable for its ubiquitous missile silos, zero percent divorce rate, and stringent health and safety legislation. The hard-nosed, cynical, humorless population of 12.039 billion Kohrians are ruled without fear or favor by a psychotic dictator, who outlaws just about everything and refers to the populace as "my little playthings."

The large, corrupt, moralistic government prioritizes Defense, although Environment, Law & Order, and Education are also considered important. It meets to discuss matters of state in the capital city of Exponds. The average income tax rate is 88.3%, and even higher for the wealthy.

The large but underdeveloped Kohrian economy, worth 729 trillion Peter's Fleshes a year, is driven almost entirely by government activity, with private enterprise illegal. However, for those in the know, there is an enormous, deeply entrenched, broadly diversified black market in Arms Manufacturing. The private sector mostly consists of enterprising ten-year-olds selling lemonade on the sidewalk, but the government is looking at stamping this out. Average income is 60,567 Peter's Fleshes, and distributed extremely evenly, with practically no difference between the richest and poorest citizens.

To 'cut off family ties' is no longer just a phrase, people caught mistreating Kohr's flag generally wind up in a great deal of pain, first-time moms are expected to be experienced parents from day one, and the number of children one can have is restricted by law. Crime, especially youth-related, is totally unknown, thanks to the all-pervasive police force and progressive social policies in education and welfare. Kohr's national animal is the Wild Ginger, which frolics freely in the nation's many lush forests, and its national religion is Atheism.

Kohr is ranked 22,166th in the world and 11th in Taijitu for Most Advanced Public Education, scoring 6,784.85 on the Edu-tellignce® Test Score.