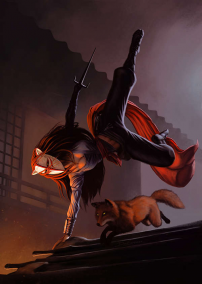 The Assailant of Kitsune4 is a massive, cultured nation, remarkable for its pith helmet sales, frequent executions, and fear of technology. The hard-nosed population of 2.524 billion Kitsune4ians have some civil rights, but not too many, enjoy the freedom to spend their money however they like, to a point, and take part in free and open elections, although not too often.

The large government juggles the competing demands of Defense, Industry, and Education. Citizens pay a flat income tax of 44.8%.

The powerhouse Kitsune4ian economy, worth 171 trillion guilders a year, is quite specialized and dominated by the Arms Manufacturing industry, with significant contributions from Woodchip Exports, Basket Weaving, and Furniture Restoration. Black market activity is frequent. State-owned companies are reasonably common. Average income is 68,014 guilders, but there is a large disparity between incomes, with the richest 10% of citizens earning 259,822 per year while the poor average 12,308, a ratio of 21.1 to 1.

Slavers are real nutters, Kitsune4ian farm salmon are known for being both horribly diseased and remarkably acrobatic, the public health bureaucracy is wrapped in miles of red tape, and immigrants who carry knives on them are presumed to be chefs. Crime is almost non-existent, thanks to a capable police force and progressive social policies in education and welfare. Kitsune4's national animal is the squirrel, which teeters on the brink of extinction due to widespread deforestation.

Kitsune4 is ranked 131,575th in the world and 3,730th in Alliance of Supreme Powers for Most Avoided, scoring 2.23 on the Kardashian Reflex Score.