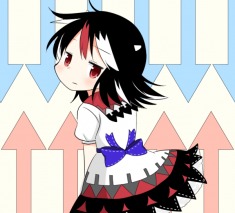 The Eternal Transient Reign of Kishinjou is a gargantuan, socially progressive nation, ruled by Seija Kijin with a fair hand, and renowned for its keen interest in outer space, smutty television, and complete absence of social welfare. The hard-nosed, hard-working, democratic population of 11.899 billion amanojaku live in a state of perpetual fear, as a complete breakdown of social order has led to the rise of order through biker gangs.

The minute, liberal, pro-business, outspoken government, or what there is of one, is solely concerned with Industry. It meets to discuss matters of state in the capital city of Shining Needle Castle. Income tax is unheard of.

The frighteningly efficient Kishinjouan economy, worth a remarkable 2,134 trillion yen a year, is driven almost entirely by the private sector, which is broadly diversified and led by the Soda Sales industry, with major contributions from Information Technology, Automobile Manufacturing, and Retail. Average income is an impressive 179,380 yen, but there is a vast disparity between incomes, with the richest 10% of citizens earning 1,452,855 per year while the poor average 4,938, a ratio of 294 to 1.

Record sales of 'child-whacking sticks' have been reported, same-sex marriages are increasingly common, the government is ignoring the latest terrorist atrocities in Shining Needle Castle for fear of causing a fuss, and city rooftops are pockmarked with the shattered remains of experimental delivery drones. Crime, especially youth-related, is all-pervasive, probably because of the absence of a police force. Kishinjou's national animal is the ice fairy, which teeters on the brink of extinction due to toxic air pollution, and its national religion is Cheat Against Impossible Danmaku.

Kishinjou is ranked 208,191st in the world and 4th in Last Remote for Highest Poor Incomes, with 4,938.18 Standard Monetary Units.