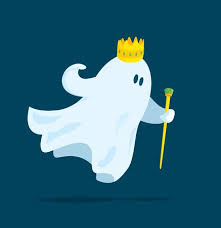 King of the Ghosts

The Historian of King of the Ghosts is a massive, socially progressive nation, ruled by King of the Ghosts with an even hand, and renowned for its compulsory military service, ubiquitous missile silos, and absence of drug laws. The quiet, industrious population of 4.38 billion Ghosts have some civil rights, but not too many, enjoy the freedom to spend their money however they like, to a point, and take part in free and open elections, although not too often.

The medium-sized government juggles the competing demands of Education, Defense, and Healthcare. It meets to discuss matters of state in the capital city of New Ghoul City II Electric Boogaloo. The average income tax rate is 27.6%, but much higher for the wealthy.

The very strong King of the Ghostsian economy, worth 316 trillion Ghost Dollars a year, is led by the Arms Manufacturing industry, with major contributions from Information Technology, Tourism, and Uranium Mining. State-owned companies are common. Average income is 72,174 Ghost Dollars, and evenly distributed, with the richest citizens earning only 3.0 times as much as the poorest.

Shanty towns are forming in the suburbs of major cities, nuclear warheads are frequently launched into space as a warning to invading meteoroids, political talk shows often have children as guests whenever they need commentary on world religions, and citizens live in superstitious fear of the mysterious glowing clouds that float over King of the Ghosts. Crime, especially youth-related, is totally unknown, thanks to a capable police force and progressive social policies in education and welfare. King of the Ghosts's national animal is the Ghost Animal, which frolics freely in the nation's many lush forests, and its national religion is The Religion of King of the Ghosts.

King of the Ghosts is ranked 46,747th in the world and 1st in The Cipheron for Highest Poor Incomes, with 40,136.85 Standard Monetary Units.