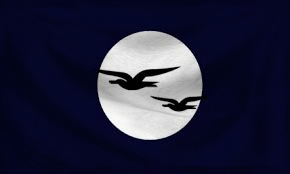 The Protectorate of Khevii Isles is a massive, safe nation, renowned for its frequent executions, ban on automobiles, and complete lack of prisons. The hard-working, democratic population of 4.353 billion Khevii Islesians enjoy a sensible mix of personal and economic freedoms, while the political process is open and the people's right to vote held sacrosanct.

The Khevii Islesian economy, worth 235 trillion Pels a year, is fairly diversified and led by the Basket Weaving industry, with major contributions from Tourism, Uranium Mining, and Arms Manufacturing. State-owned companies are reasonably common. Average income is 54,139 Pels, and evenly distributed, with the richest citizens earning only 3.1 times as much as the poorest.

Voting is voluntary, cars are banned, and the Khevii Islesian Arts Council pays teenagers to sit through opera performances. Crime is well under control. Khevii Isles's national animal is the Seagull.

Khevii Isles is ranked 135,583rd in the world and 1st in Free Nations Region for Largest Publishing Industry, scoring 1,731.68 on the Bella Potter Productivity e-Index.