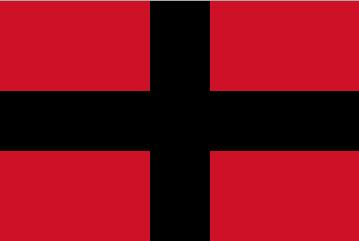 The Holy Empire of Karolosia is a gargantuan, genial nation, ruled by Emperor Karolos with an even hand, and notable for its aversion to nipples, devotion to social welfare, and stringent health and safety legislation. The compassionate, cheerful, devout population of 17.543 billion Karolosians are prohibited from doing almost everything except voting, which they do timidly and conservatively.

The enormous, corrupt, moralistic, socially-minded government juggles the competing demands of Education, Law & Order, and Healthcare. It meets to discuss matters of state in the capital city of Karolosia. The income tax rate is 100%.

The frighteningly efficient Karolosian economy, worth a remarkable 4,825 trillion Staters a year, is led by the Tourism industry, with major contributions from Information Technology, Beef-Based Agriculture, and Book Publishing. State-owned companies are common. Average income is an amazing 275,076 Staters, and distributed extremely evenly, with practically no difference between the richest and poorest citizens.

With increasingly clear skies nobody seems to mind the electricity bill going through the roof, even the nation's brussel sprouts are delicious and nutritious, the new Karolosian-made OS is buggier and more inconvenient than a horse-drawn carriage, and the government spends more on chasing distant comets than on basic infrastructure. Crime, especially youth-related, is totally unknown, thanks to a very well-funded police force and progressive social policies in education and welfare. Karolosia's national animal is the Lykos, which frolics freely in the nation's many lush forests, and its national religion is Kyrionism.

Karolosia is ranked 111,921st in the world and 3,547th in Osiris for Largest Insurance Industry, scoring 542.68 on the Risk Expulsion Effectiveness Rating.