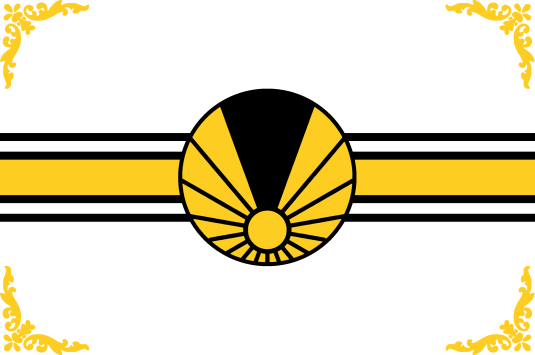 The Prefecture of Kanyuo is a colossal, efficient nation, ruled by Tagawa Kenji with an even hand, and notable for its zero percent divorce rate, free-roaming dinosaurs, and irreverence towards religion. The hard-nosed, hard-working, democratic population of 5.303 billion Kandorese are either ruled by a sleek, efficient government or a conglomerate of multinational corporations; it's difficult to tell which.

The relatively small government juggles the competing demands of Defense, Industry, and Education. It meets to discuss matters of state in the capital city of Tenkyo. The average income tax rate is 12.2%.

The frighteningly efficient Kandorese economy, worth 588 trillion Zais a year, is broadly diversified and led by the Arms Manufacturing industry, with major contributions from Retail, Information Technology, and Automobile Manufacturing. Average income is an impressive 110,910 Zais, and evenly distributed, with the richest citizens earning only 4.6 times as much as the poorest.

Only the rich can afford the latest medical innovations, retirement homes are often fitted with luxurious suites, corporations donate huge sums of money to favored politicians, and the transit system is throwing poor people under the bus. Crime, especially youth-related, is totally unknown. Kanyuo's national animal is the Kudokin, which teeters on the brink of extinction due to widespread deforestation, and its national religion is Tendo.

Kanyuo is ranked 22,407th in the world and 3rd in KYCF for Largest Publishing Industry, scoring 7,457.43 on the Bella Potter Productivity e-Index.