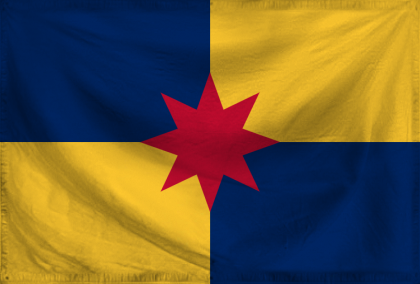 The Shining Land of Kantur is a massive, socially progressive nation, renowned for its keen interest in outer space and irreverence towards religion. The hard-nosed, hard-working population of 1.226 billion Kanturians enjoy extensive civil freedoms, particularly in social issues, while business tends to be more regulated.

The tiny government juggles the competing demands of Welfare, Education, and Law & Order. It meets to discuss matters of state in the capital city of Eildenstat. The average income tax rate is 8.6%.

The very strong Kanturian economy, worth 91.9 trillion Kanturian Dollars a year, is broadly diversified and led by the Basket Weaving industry, with major contributions from Trout Farming, Cheese Exports, and Soda Sales. Average income is 74,970 Kanturian Dollars, and evenly distributed, with the richest citizens earning only 4.4 times as much as the poorest.

Feuilletons can only be deciphered with a Galliennais dictionary, the nation has an international reputation for compassion, the new foreign policy is "why bother invading neighbours when they can be bought wholesale?", and the nation's atlases tend to go out of date every few weeks. Crime is relatively low. Kantur's national animal is the Platypus.

Kantur is ranked 134,084th in the world and 7th in Region Inc for Most Beautiful Environments, with 514.53 Pounds Of Wildlife Per Square Mile.