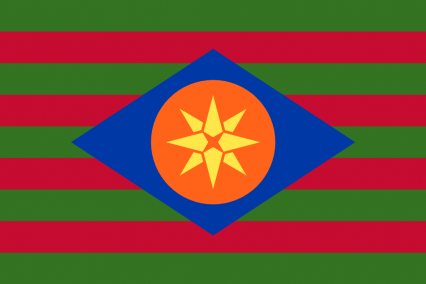 The Principality of Kalekyano is a massive, efficient nation, notable for its barren, inhospitable landscape and compulsory military service. The hard-working, democratic population of 1.563 billion Kalekyanons are either ruled by a sleek, efficient government or a conglomerate of multinational corporations; it's difficult to tell which.

The tiny government is primarily concerned with Defense, although Law & Order, Education, and Spirituality are also considered important, while International Aid and Environment aren't funded at all. Citizens pay a flat income tax of 8.2%.

The very strong Kalekyanan economy, worth 95.4 trillion kronas a year, is broadly diversified and led by the Uranium Mining industry, with significant contributions from Gambling, Pizza Delivery, and Automobile Manufacturing. Average income is 61,057 kronas, with the richest citizens earning 9.8 times as much as the poorest.

Street graffiti indicates the political party that dominates a neighborhood, ship captains always order a return to port at the slightest sign of rain, and all major public areas are watched by police surveillance cameras. Crime, especially youth-related, is relatively low. Kalekyano's national animal is the penguin, which can occasionally be seen avoiding garbage in the nation's murky oceans.

Kalekyano is ranked 101,455th in the world and 2nd in the Order of the Silver Compass for Most Politically Free, scoring 69.56 on the Diebold Election Inking Scale.