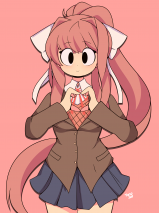 The Kingdom of Just-Monika is a colossal, pleasant nation, renowned for its burgeoning Giraffe population. The hard-working population of 6.551 billion Just-Monikans have some civil rights, but not too many, enjoy the freedom to spend their money however they like, to a point, and take part in free and open elections, although not too often.

The relatively small government juggles the competing demands of Defense, Law & Order, and Healthcare. The average income tax rate is 16.1%.

The Just-Monikan economy, worth 297 trillion Yen a year, is fairly diversified and led by the Door-to-door Insurance Sales industry, with major contributions from Retail, Furniture Restoration, and Information Technology. Average income is 45,481 Yen, and evenly distributed, with the richest citizens earning only 3.6 times as much as the poorest.

The alarmingly racist TV show 'Bigtopians Say the Darndest Things' is a hit, military spending recently hit a new high, organ donation is compulsory, and terrified tympanists are finding themselves on the front lines armed only with kettledrums. Crime is moderate. Just-Monika's national animal is the Giraffe.

Just-Monika is ranked 150,995th in the world and 3rd in Doki Doki NationStates Club for Highest Wealthy Incomes, with 82,458 Standard Monetary Units.