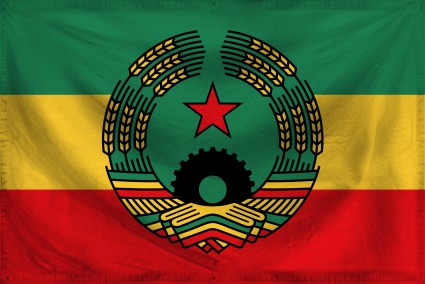 The United Collectives of Jum Vland is a massive, genial nation, ruled by Escipio Sumski with an even hand, and remarkable for its keen interest in outer space, free-roaming dinosaurs, and compulsory military service. The compassionate, democratic population of 2.191 billion Jum Vlandards enjoy extensive civil freedoms, particularly in social issues, while business tends to be more regulated.

The enormous government juggles the competing demands of Education, Defense, and Administration. It meets to discuss matters of state in the capital city of Sankara. The average income tax rate is 82.8%, and even higher for the wealthy.

The thriving Jum Vlandian economy, worth 206 trillion Kronor a year, is driven entirely by a combination of government and state-owned industry, with private enterprise illegal. The industrial sector, which is quite specialized, is led by the Trout Farming industry, with major contributions from Information Technology, Book Publishing, and Arms Manufacturing. Average income is 94,224 Kronor, and distributed extremely evenly, with little difference between the richest and poorest citizens.

The Violetist community celebrates bombshells being dropped on Jum Vland, no one over the age of 35 has the slightest clue what is going on, it's been a banner year for local vexillology, and any body part that can be cut off a person is no longer considered to be their property. Crime is totally unknown, thanks to a capable police force and progressive social policies in education and welfare. Jum Vland's national animal is the Eurasian Beaver, which is also the nation's favorite main course.

Jum Vland is ranked 132,809th in the world and 338th in The Leftist Assembly for Least Corrupt Governments, with 93.01 Percentage Of Bribes Refused.