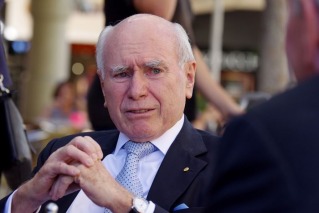 The Federation of John Howard is a massive, safe nation, remarkable for its barren, inhospitable landscape, compulsory military service, and irreverence towards religion. The hard-working, democratic population of 3.272 billion Australians enjoy a sensible mix of personal and economic freedoms, while the political process is open and the people's right to vote held sacrosanct.

The strong Australian economy, worth 213 trillion Australian Dollars a year, is broadly diversified and led by the Automobile Manufacturing industry, with major contributions from Woodchip Exports, Pizza Delivery, and Trout Farming. Average income is 65,286 Australian Dollars, with the richest citizens earning 7.1 times as much as the poorest.

The tenet of free speech is held dear. Crime, especially youth-related, is almost non-existent, thanks to a capable police force and progressive social policies in education and welfare. John Howard's national animal is the Kangaroo, which can occasionally be seen sifting through garbage in the nation's cities.

John Howard is ranked 113,505th in the world and 4th in Parliament of Australia for Most Armed, with 0.33 Weapons Per Person.