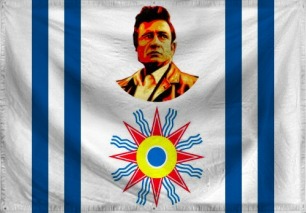 The Cashtitutional Monarchy of Jamil Federations is a gargantuan, environmentally stunning nation, ruled by King Abdi-Ili of Jamil Federations with an even hand, and notable for its otherworldly petting zoo, frequent executions, and complete absence of social welfare. The hard-nosed, hard-working, devout population of 13.601 billion Jamilites enjoy extensive civil freedoms, particularly in social issues, while business tends to be more regulated.

The relatively small, corrupt government juggles the competing demands of Education, Law & Order, and Industry. It meets to discuss matters of state in the capital city of Queenstown. The average income tax rate is 59.5%, and even higher for the wealthy.

The frighteningly efficient Jamilian economy, worth a remarkable 3,041 trillion Sinbadis a year, is broadly diversified and led by the Information Technology industry, with significant contributions from Retail, Tourism, and Arms Manufacturing. State-owned companies are reasonably common. Average income is an amazing 223,630 Sinbadis, and distributed extremely evenly, with little difference between the richest and poorest citizens.

You can call your arthritic immigrant neighbour for all your roof-tiling and guttering needs, rugby players that knock each other over always stop to make sure the other fellow is okay, supermarkets must refund spoilt milk even six months after the sale, and soldiers on first dates introduce themselves only by their ranks and serial numbers. Crime, especially youth-related, is totally unknown, thanks to a capable police force and progressive social policies in education and welfare. Jamil Federations's national animal is the Cashist Pelican, which soars majestically through the nation's famously clear skies, and its national religion is Catholicism.

Jamil Federations is ranked 3,236th in the world and 132nd in Osiris for Most Developed, scoring 96.21 on the Human Development Index.

The Great Lechuga, and 2 others.