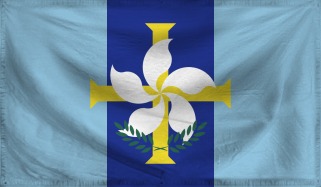 The Kingdom of Ivtrovertia is a colossal, safe nation, ruled by Cathryn with a fair hand, and remarkable for its rum-swilling pirates, museums and concert halls, and devotion to social welfare. The compassionate, democratic, cheerful, devout population of 8.683 billion Introvertians enjoy a sensible mix of personal and economic freedoms, while the political process is open and the people's right to vote held sacrosanct.

The enormous government prioritizes Education, although Environment, Healthcare, and Administration are also considered important, while Defense receives no funds. It meets to discuss matters of state in the capital city of Silence. The average income tax rate is 90.1%, and even higher for the wealthy.

The frighteningly efficient Ivtrovertian economy, worth 908 trillion moments of silence a year, is highly specialized and led by the Tourism industry, with major contributions from Book Publishing, Basket Weaving, and Information Technology. State-owned companies are common. Average income is an impressive 104,625 moments of silence, and distributed extremely evenly, with little difference between the richest and poorest citizens.

Giggling teens are asked to put their mouths on rubber dolls, ministers browse Alright! magazine for fashion tips, things are looking up for patients accidentally prescribed erectile dysfunction medication, and healthcare workers are flummoxed over the spike in foreign tourists with sudden-onset heart disease. Crime is totally unknown, thanks to a capable police force and progressive social policies in education and welfare. Ivtrovertia's national animal is the Shih Tzu, which frolics freely in the nation's many lush forests, and its national religion is Respecting Others.

Ivtrovertia is ranked 3,295th in the world and 95th in the Rejected Realms for Most Advanced Public Education, scoring 16,598.76 on the Edu-tellignce® Test Score.