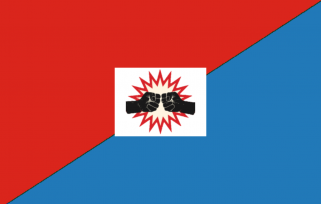 The Republic of Island of Darkness is a colossal, cultured nation, ruled by Doctor Darkness with an even hand, and remarkable for its museums and concert halls, frequent executions, and state-planned economy. The hard-nosed, devout population of 6.824 billion Islanders are fiercely patriotic and enjoy great social equality; they tend to view other, more capitalist countries as somewhat immoral and corrupt.

The government — a sprawling, bureaucracy-choked morass — juggles the competing demands of Defense, Environment, and Spirituality. The average income tax rate is 78.9%, and even higher for the wealthy.

The Islander economy, worth 293 trillion beans a year, is driven entirely by a combination of government and state-owned industry, with private enterprise illegal. However, for those in the know, there is a large, well-organized, extremely specialized black market in Arms Manufacturing. The private sector mostly consists of enterprising ten-year-olds selling lemonade on the sidewalk, but the government is looking at stamping this out. Average income is 42,950 beans, and distributed extremely evenly, with little difference between the richest and poorest citizens.

Anyone who doesn't attend Official Governmental Religious Services is fined, the military's primary weapons are fear, surprise, ruthless efficiency, and a fanatical devotion to Voodoo, Doctor Darkness has been known to threaten dissenting citizens with a machine gun at press conferences, and Doctor Darkness is rumored to have teleportation powers. Crime is totally unknown, thanks to the all-pervasive police force and progressive social policies in education and welfare. Island of Darkness's national animal is the bird, which soars majestically through the nation's famously clear skies, and its national religion is Voodoo.

Island of Darkness is ranked 181,282nd in the world and 245th in The Leftist Assembly for Largest Retail Industry, scoring -5.2 on the Shrinkwrap Consignment Productivity Index.