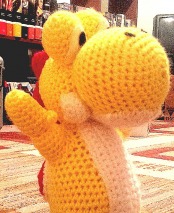 The Multi-colored Dinosaurs of Isla de Yoshi is a gargantuan, socially progressive nation, ruled by Yellow Yoshi with a fair hand, and renowned for its keen interest in outer space, national health service, and daily referendums. The hard-working, democratic, cheerful population of 23.747 billion Isla de Yoshians hold their civil and political rights very dear, although the wealthy and those in business tend to be viewed with suspicion.

The minute, liberal, outspoken government, or what there is of one, is primarily concerned with Education, with Social Policy and Industry also on the agenda, while Spirituality and Law & Order receive no funds. It meets to discuss matters of state in the capital city of Donut Plains. The average income tax rate is 1.5%.

The frighteningly efficient Isla de Yoshian economy, worth a remarkable 4,801 trillion melons a year, is driven almost entirely by the private sector, which is fairly diversified and led by the Tourism industry, with significant contributions from Book Publishing, Information Technology, and Gambling. Average income is an amazing 202,187 melons, and evenly distributed, with the richest citizens earning only 4.7 times as much as the poorest.

The Isla de Yoshian Babysitters Club has proven to be a huge relief to stressed-out parents across the nation, teenage male videogamers often suffer repetitive strain wrist injuries, elections are won by the candidate who makes the best 'yo mama' jokes, and young and brooding teens are welcomed with open arms to the Dogwarts School of Strangeness and Sorcery. Crime, especially youth-related, is all-pervasive, perhaps because of the country's complete lack of prisons. Isla de Yoshi's national animal is the piranha plant, which is also the nation's favorite main course.

Isla de Yoshi is ranked 7,693rd in the world and 7th in Gay for Nudest, with 225 Cheeks Per Square Mile.