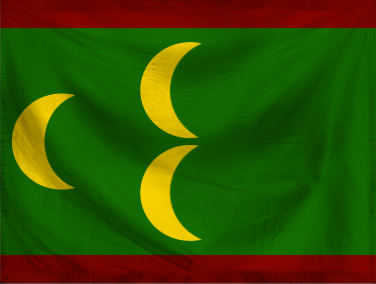 The Temporarily a Sultanate of Insaanistan is a massive, cultured nation, ruled by Soraya Khan with a fair hand, and notable for its daily referendums, pith helmet sales, and anti-smoking policies. The compassionate, democratic, devout population of 3.038 billion Insaanis enjoy a sensible mix of personal and economic freedoms, while the political process is open and the people's right to vote held sacrosanct.

The enormous government juggles the competing demands of Education, Healthcare, and Environment. It meets to discuss matters of state in the capital city of Muslimbol. The average income tax rate is 81.7%, and even higher for the wealthy.

The powerhouse Insaani economy, worth 239 trillion Dinars a year, is quite specialized and led by the Beef-Based Agriculture industry, with major contributions from Book Publishing, Information Technology, and Uranium Mining. State-owned companies are reasonably common. Average income is 78,886 Dinars, and distributed extremely evenly, with little difference between the richest and poorest citizens.

Statues of famous citizens are erected or demolished on a purely partisan basis, the hardest thing for a mining operation to dig through is government red tape, lobbyists are trying to convince government to recategorize most natural disasters as "non-critical naturogenic inconveniences", and the nation's atlases tend to go out of date every few weeks. Crime, especially youth-related, is totally unknown, thanks to a very well-funded police force and progressive social policies in education and welfare. Insaanistan's national animal is the Lion, which frolics freely in the nation's many lush forests, and its national religion is Islam.

Insaanistan is ranked 11,037th in the world and 2nd in Libertarium for Best Weather, with 207 Meters Of Sunlight.

Most Recent Government Activity: 83 minutes ago