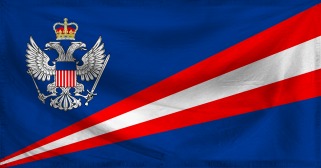 The Imperial Republic of Imperial Arconia is a gargantuan, safe nation, ruled by Emperor Arconus with a fair hand, and notable for its compulsory military service, smutty television, and absence of drug laws. The compassionate, democratic population of 13.792 billion Arconians hold their civil and political rights very dear, although the wealthy and those in business tend to be viewed with suspicion.

The relatively small, outspoken government prioritizes Defense, with Education, Industry, and Healthcare also on the agenda, while Social Policy and Public Transport aren't funded at all. It meets to discuss matters of state in the capital city of Cydonia. The average income tax rate is 11.1%, but much higher for the wealthy.

The powerhouse Imperial Arconian economy, worth a remarkable 1,056 trillion Dollars a year, is broadly diversified and led by the Information Technology industry, with major contributions from Arms Manufacturing, Book Publishing, and Automobile Manufacturing. Average income is 76,602 Dollars, and evenly distributed, with the richest citizens earning only 2.8 times as much as the poorest.

Immigrant herding has become a national pastime, the nation's laws on image rights are amongst the strictest in the world, wildlife near farms is slowly becoming extinct, and motorists must pay to enter inner-cities during peak hours. Crime, especially youth-related, is moderate, perhaps because of the country's complete lack of prisons. Imperial Arconia's national animal is the Eagle, which can occasionally be seen dodging aircraft in the nation's cities, and its national religion is Jedi Bendu.

Imperial Arconia is ranked 53,716th in the world and 1st in The SOP for Most Valuable International Artwork, with 2.48 Bank.