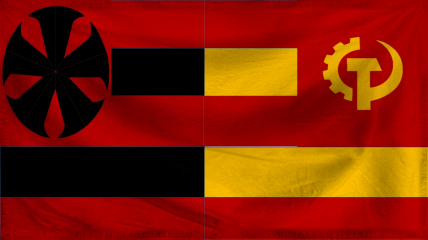 The Greater Galactic Empire of Imperial Akatsuki is a colossal, efficient nation, ruled by God Emperor Vlad with an iron fist, and remarkable for its enslaved workforce, keen interest in outer space, and public floggings. The hard-nosed, cynical, humorless population of 7.96 billion Imps are ruled without fear or favor by a psychotic dictator, who outlaws just about everything and refers to the populace as "my little playthings."

The relatively small, corrupt, moralistic, well-organized government juggles the competing demands of Defense, Law & Order, and Education. It meets to discuss matters of state in the capital city of Byss. The average income tax rate is 76.2%, and even higher for the wealthy.

The frighteningly efficient Imperial economy, worth a remarkable 3,752 trillion Succs a year, is driven entirely by a combination of government and state-owned industry, with private enterprise illegal. However, for those in the know, there is an enormous, deeply entrenched, fairly diversified black market in Arms Manufacturing, Information Technology, Uranium Mining, and Woodchip Exports. The private sector mostly consists of enterprising ten-year-olds selling lemonade on the sidewalk, but the government is looking at stamping this out. Average income is an amazing 471,480 Succs, and evenly distributed, with the richest citizens earning only 2.1 times as much as the poorest.

Children who can't memorize their multiplication tables are sent to the mines, inter-species marriages are ignored by the government, the nation's generous tax credits have brought all the film studios to the yard, and healthcare workers are flummoxed over the spike in foreign tourists with sudden-onset heart disease. Crime, especially youth-related, is totally unknown, thanks to a capable police force and progressive social policies in education and welfare. Imperial Akatsuki's national animal is the Hollow, which is also the nation's favorite main course.

Imperial Akatsuki is ranked 166th in the world and 7th in The East Pacific for Most Secular, with 99.29 Atheism Rate.