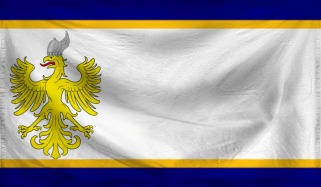 The Absolute royal federation of Imeriata is a gargantuan, efficient nation, ruled by his royal highness the king with an iron fist, and remarkable for its sprawling nuclear power plants, rampant corporate plagiarism, and keen interest in outer space. The hard-nosed, hard-working, cynical population of 25.347 billion Imeriatans are either ruled by a sleek, efficient government or a conglomerate of multinational corporations; it's difficult to tell which.

The minute, corrupt, pro-business government, or what there is of one, is solely concerned with Defense. It meets to discuss matters of state in the capital city of Imerbürg. Citizens pay a flat income tax of 1.7%.

The frighteningly efficient Imeriatan economy, worth a remarkable 4,307 trillion Imerian kronor a year, is driven almost entirely by the private sector, which is broadly diversified and led by the Gambling industry, with significant contributions from Arms Manufacturing, Book Publishing, and Uranium Mining. Average income is an impressive 169,930 Imerian kronor, but there is a large disparity between incomes, with the richest 10% of citizens earning 794,196 per year while the poor average 21,739, a ratio of 36.5 to 1.

The government has completely eliminated all childcare programs, many working fathers have never seen their children, Imeriata-made cars tend to catch fire in people's driveways, and animal control is going door-to-door releasing all pets back into the wild. Crime is all-pervasive, probably because of the absence of a police force. Imeriata's national animal is the Eagel, which teeters on the brink of extinction due to widespread deforestation.

Imeriata is ranked 94,652nd in the world and 24th in Mystria for Most Developed, scoring 57.4 on the Human Development Index.