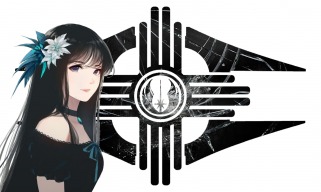 "No speech is as powerful as a sincere one."

Empress Andromeda Ceriss is the present Empress of the New Imperial Order of Iciaros. The second daughter of the noble house of Ceriss, she entered the Iciarosian Leadership Talent Development Programme at the age of 11, and was appointed heir to the throne at 19. She ascended to the throne after the death of her predecessor, Empress-Valkyria Azalea, in the aftermath of the Soul Crisis in 722 AA.

Andromeda Ceriss was born to, at the time, a middle-class family in the Iciarosian capital region. She had an uneventful early life. At the age of 10, she was shortlisted for entry into the LTDP after ranking in the top 5% of her year in the annual leadership aptitude test, and when she was 11 her family moved to the capital city of New Ixainia for her education in Angelus Academy under the LTDP.

Records indicate that Ceriss performed consistently well while in Angelus Academy, ranking in the top 15% of her cohort for the entirety of her enrollment. She participated in 10 attachments, mostly with the diplomatic corps, and participated in diplomatic efforts during the international Valkyrian Crisis of 704 - 706 AA. Diplomatic reports list her as among the staff present in contested embassies, as well as on the ground with Iciarosian legions to calm the populations of the foreign territories where they were stationed and aid in the negotiations that eventually led to the end of the crisis.

In 707 AA, in recognition of her and her family's service to the crown (her mother and father being among the military personnel that participated in the crisis), they were awarded honorary noble titles and the House of Ceriss was formed.

Selection as Heir and WA Delegate

In 708 AA, Lady Ceriss was shortlisted as one of the potential candidates for heirship by Empress-Valkyria Azalea. In 710 AA, she was appointed formally as Crown Princess, whereupon she moved into the Crown Princess' quarters in Ixainia Palace, though she continued to study at Angelus Academy afterwards. In 712 AA, following the death of Iciaros' previous delegate to the World Assembly, Crown Princess Ceriss was appointed to the position.

The Soul Crisis and Ascension to the Throne

In 721 AA, Crown Princess Ceriss temporarily assumed the duties of Empress while Empress-Valkyria Azalea was absent on a diplomatic mission. During this time, a string of assassinations on Iciarosian soil occurred, and intelligence agencies identified the Iciarosian protectorate of Orial as the almost-certain culprit. Ceriss attempted to convince Orial to accept Iciarosian detectives to investigate Orials documents and search for the assassin on Orialian soil, where Iciarosian intelligence believed they had fled to; however, Orial refused, and following their shooting down of Iciarosian transports attempting to carry detectives to Orial, Ceriss eventually ordered then-Orialian leader Bishop-Protector Orius to be replaced.

This precipitated the Soul Crisis, an event wherein Bishop-Protector Orius obtained powerful soul magic, and perpetrated a genocide on his own people to gather their souls and give him enough power to defeat Iciaros. Ceriss participated heavily in this event, initially offering herself as hostage in exchange for the safety of the Orialian people, and when that failed, working under Empress-Valkyria Azalea (upon her return) to ensure the success of Iciaros military operations against Orius. Ceriss is especially credited with securing the bloodless capture of Orials capital city Orion by Iciarosian forces by delivering the now-famous Speech of Orion, an event that ultimately contributed heavily to the end of the crisis.

The Soul Crisis eventually came to an end in 722 AA, with the deaths of Orius and Empress-Valkyria Azalea. Though Ceriss was thus the de facto head of state, she postponed her official coronation while she organised humanitarian aid and participated in ground work to identify victims of the crisis. She was eventually crowned Empress Andromeda Ceriss in 723 AA, becoming the 22nd Empress of Iciaros.

Following her coronation, Empress Ceriss assembled the shortlist of candidates for the position of Crown Princess, which was now vacant. In 725 AA she appointed Cynthia Saphira as her heir.

Related Article: Nature (and Political Stance) of the Empresses

As with most Empresses, Empress Ceriss is generally seen as wise, intelligent, perceptive, and prescient, though this stems mainly from the reputation of the position rather than her own. As distinct from her predecessors, she is seen as diplomatic and conflict-averse, an attitude that has been both praised and criticised. She is also perceived as more in-touch with the common people, eschewing a historically directive leadership for a somewhat more hands-on approach, a deviation that has also been praised and criticised (the latter drawing from the potential for the loss of famous Imperial objectivity, unbias, and unemotional assessment). Finally, her readiness to sacrifice herself for the good of her people is a quality that, following the Soul Crisis, has not escaped the attention of the public, though she insists that self-sacrifice is a quality possessed by every Empress (as seen, particularly, in her predecessors sacrifice to end the Crisis).

More personally, those who have met and interacted with her in person (particularly her diplomatic staff at the World Assembly) have generally told stories of friendliness and accommodation, alongside a few of clumsiness and childish humour. Though she prefers to do anything else, she can bring herself to be firm and unyielding, as any good diplomat should. She also does her best to be as helpful as she thinks possible, and she takes pains to be courteous and polite regardless of who she is speaking to. Nonetheless, her staff whisper of a fairly obvious tell of hers - her tendency to be much more relaxed and casual around people whose company she genuinely finds relaxing.

I just read the new draft for my biography. More acceptable, but... I don't know how to feel about it. I mean, it's good enough, but I wonder if this is all anyone will ever know of me. The perfect Empress side. After I die, no one will remember how much I worry about everything, or how much I'm terrified of messing up, or how young and stupid I feel for someone with hundreds of years of memories and a throne to put her butt on. Heh.

I suppose Cynthia will remember. And the Empresses who come after. That'll have to be enough.

As Empress, Empress Ceriss benefits from the Ritual of Succession with regards to her magic prowess. Though magic sensitivity and capability cannot be directly transferred through the Ritual, which only passes down the knowledge of previous Empresses, the knowledge received by the subject of the Ritual includes magic techniques, much of which reportedly includes powerful techniques not available to the general public.

Empress Ceriss is magic-sensitive, meaning that she is able to access conventional magic. She can also make use of black magic, which, due to its non-dependence on magic sensitivity, has been the go-to choice of magic for Empresses in the past who could not use conventional magic.

The exact extent of Imperial magic power cannot be readily ascertained. However, the powers possessed by Empress Ceriss can be deduced from magic used by past Empresses. Her predecessor, Empress-Valkyria Azalea, was said to have delivered magic power outstripping the firepower of millions of soldiers through the application of black magic alone, though it is uncertain if this account is accurate or if it refers to the appearance of power rather than actual damage capability. Hundreds of years ago, Empress Ariel fought her way through enemy battalions accompanied by only a small force, delivering the fatal blow to her opponents in the Wars of Unity.

Some types of magic harnessed by Empresses that have been observed or recorded are:

Prior to becoming Empress

I just wish we lived in a world where everyone could get along without having to threaten anyone.

I cant imagine what I would have studied if not diplomacy. Its kind of who I am.

Is it possible to have peace forever? I dont know. Probably not. But Im not going to let that stop me from trying.

You know, sometimes its a lot harder to be nice than Id like.

(in the days before the Soul Crisis) No. I believe in diplomacy. No violence until absolutely necessary.

(referring to the Speech of Orion) "I remember the Grand General asking me back then, 'Why did you do it? You could have died!' and then I wondered that myself. I didn't realise why until it was all over. It was because I was replaceable. I'm the Crown Princess, sure. But if I died, there were many more candidates waiting to take my place. And what use is a Crown Princess when an Empress is still alive? In the big scheme of things, my death would have meant nothing - just a little hiccup it'd take maybe, what, a week to smooth over? What was at stake was worth a lot more than the inconvenience that my death would've caused. I understand now that that is how a leader has to think - you're only as important as the purpose you serve for your people. Doing what I did and thinking the way I did is the only way a leader ought to lead. Don't you think?"

I was naively optimistic when I was younger. Now I try to be positive but pessimistic. I hope for the best, but plan for the worst.

Sometimes violence is the only option. But we can only know that when we have exhausted all the others.

Why do you presume I harbour grudges? I do not. I am a diplomat; it is in my blood to find a win-win scenario.

Hope is a powerful force. It fuels determination, which is the only means by which the impossible may be conquered.

My deepest apologies. I hate to trouble you, but could you go away?

The New Imperial Order of Iciaros