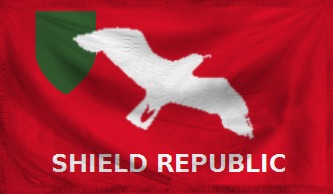 The Gull Flag Republic of Iansisle is a gargantuan, cultured nation, ruled by Nicodemo Ranalte with an even hand, and notable for its complete lack of prisons, keen interest in outer space, and smutty television. The hard-nosed, hard-working, cheerful population of 37.657 billion Iansisleans enjoy extensive civil freedoms, particularly in social issues, while business tends to be more regulated.

The relatively small, corrupt, liberal government juggles the competing demands of Education, Industry, and Administration. It meets to discuss matters of state in the capital city of Ianapalis. The average income tax rate is 44.3%, but much higher for the wealthy.

The frighteningly efficient Iansislean economy, worth an astonishing 17,505 trillion generals a year, is broadly diversified and led by the Information Technology industry, with major contributions from Automobile Manufacturing, Arms Manufacturing, and Uranium Mining. Black market activity is rampant. Average income is an amazing 464,880 generals, and evenly distributed, with the richest citizens earning only 2.5 times as much as the poorest.

Literature classes frequently go on field trips to rock concerts, the government has embraced apartheid, interest in globalism never flags, and signs saying "No Poor People or Weirdoes" are common outside shops and cafés. Crime, especially youth-related, is so common that it is unusual to encounter someone following the law, perhaps because of the country's complete lack of prisons. Iansisle's national animal is the seagull, which is also the nation's favorite main course.