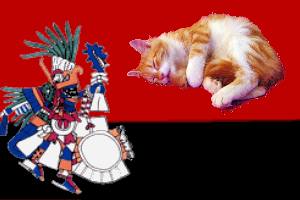 The Theocracy of Huitzilopochlti is a gargantuan, safe nation, notable for its compulsory military service, restrictive gun laws, and stringent health and safety legislation. The cynical population of 21.354 billion Huitzilopochltians are ruled without fear or favor by a psychotic dictator, who outlaws just about everything and refers to the populace as "my little playthings."

The enormous, moralistic, socially-minded, well-organized government juggles the competing demands of Spirituality, Defense, and Law & Order. The average income tax rate is 57.6%, and even higher for the wealthy.

The sizeable but stagnant Huitzilopochltian economy, worth 63.3 trillion Birdies a year, is quite specialized and led by the Pizza Delivery industry, with major contributions from Trout Farming, Arms Manufacturing, and Uranium Mining. Black market activity is frequent. State-owned companies are common. Average income is 2,965 Birdies, and distributed extremely evenly, with practically no difference between the richest and poorest citizens.

Crime, especially youth-related, is totally unknown, thanks to a well-funded police force and progressive social policies in education and welfare. Huitzilopochlti's national animal is the Catoborus.

Huitzilopochlti is ranked 234,232nd in the world and 3rd in Poqilet for Most Advanced Public Education, scoring 116.14 on the Edu-tellignce® Test Score.