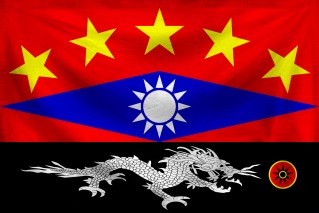 The Lucky Christmas Republic of Huang Dong is a colossal, safe nation, ruled by Hao Dong with an even hand, and renowned for its infamous sell-swords, complete lack of prisons, and disturbing lack of elderly people. The compassionate, devout population of 6.56 billion Dongians are fiercely patriotic and enjoy great social equality; they tend to view other, more capitalist countries as somewhat immoral and corrupt.

The large, corrupt government juggles the competing demands of Education, Defense, and Law & Order. It meets to discuss matters of state in the capital city of Huang Dong City. The average income tax rate is 95.7%.

The frighteningly efficient Huang Dongian economy, worth a remarkable 1,056 trillion Huangoes a year, is quite specialized and led by the Information Technology industry, with major contributions from Tourism, Arms Manufacturing, and Book Publishing. State-owned companies are common. Average income is an impressive 160,976 Huangoes, and evenly distributed, with the richest citizens earning only 2.0 times as much as the poorest.

Male politicians lose their jobs for staring too long at their female counterparts, the nation locks people up and tells them they're mad for compassion's sake, excited shovel-bearing geeks wander the countryside, and pushy mums tell their kids to be doctors and engineers but steer them away from being penniless lawyers. Crime, especially youth-related, is totally unknown, thanks to a very well-funded police force and progressive social policies in education and welfare. Huang Dong's national animal is the Blue Pandajay, which soars majestically through the nation's famously clear skies, and its national religion is Christianity.

Huang Dong is ranked 127,016th in the world and 3rd in Geographica for Largest Soda Pop Sector, scoring 321.49 on the Addison-Fukk Productivity Rating.