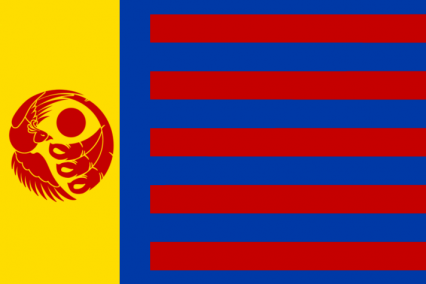 The Second Empire of Hoterallia is a massive, efficient nation, ruled by Emperor Yakohi with an even hand, and notable for its compulsory military service, public floggings, and triple-decker prams. The compassionate, democratic, cheerful, devout population of 4.636 billion Hoterallians have some civil rights, but not too many, enjoy the freedom to spend their money however they like, to a point, and take part in free and open elections, although not too often.

The large, corrupt government juggles the competing demands of Administration, Education, and Industry. It meets to discuss matters of state in the capital city of Orajioe. The average income tax rate is 90.6%, and even higher for the wealthy.

The frighteningly efficient Hoterallian economy, worth 723 trillion Hoterians a year, is broadly diversified and led by the Information Technology industry, with major contributions from Book Publishing, Uranium Mining, and Woodchip Exports. Black market activity is frequent. State-owned companies are common. Average income is an impressive 156,125 Hoterians, and evenly distributed, with the richest citizens earning only 2.2 times as much as the poorest.

Military spending is on the increase, the country has been 'going shopping' by annexing nearby nations for their resources, few that venture into government archives are ever seen again, and therapists dispense hugs for heroin dealers and cuddles for crackheads. Crime, especially youth-related, is totally unknown, thanks to a capable police force and progressive social policies in education and welfare. Hoterallia's national animal is the Shiba Inu, which frolics freely in the nation's many lush forests, and its national religion is Gaoism.

Hoterallia is ranked 8,670th in the world and 16th in Anteria for Most Advanced Public Education, scoring 11,596.58 on the Edu-tellignce® Test Score.