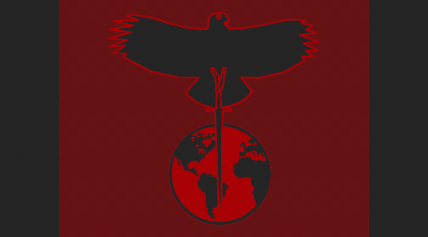 The Black Hawk of Holoratus is a massive, orderly nation, ruled by Visoraxus Holoratus Starkiller with an iron fist, and notable for its daily referendums, ubiquitous missile silos, and suspicion of poets. The hard-nosed, cynical, humorless population of 3.618 billion Holoratusians are kept under strict control by the oppressive government, which measures its success by the nation's GDP and refers to individual citizens as "human resources."

The relatively small, corrupt, moralistic government is primarily concerned with Defense, although Law & Order, Education, and Administration are also considered important, while International Aid receives no funds. It meets to discuss matters of state in the capital city of Durmengrad. Citizens pay a flat income tax of 22.4%.

The strong Holoratusian economy, worth 326 trillion regions a year, is broadly diversified and dominated by the Arms Manufacturing industry, with significant contributions from Tourism, Retail, and Information Technology. Black market activity is frequent. State-owned companies are common. Average income is 90,136 regions, with the richest citizens earning 5.7 times as much as the poorest.

The judicial branch is strongly influenced by major corporations, prisoners work-share to cut down rising costs of keeping them in jail, the standardised national curriculum requires that all-male classes be taught why they have periods, and auditors are gutting every governmental department. Crime, especially youth-related, is totally unknown, thanks to a capable police force and progressive social policies in education and welfare. Holoratus's national animal is the black hawk, which soars majestically through the nation's famously clear skies.

Holoratus is ranked 56,327th in the world and 137th in The Black Hawks for Lowest Crime Rates, with 68.88 law-abiding acts per hour.