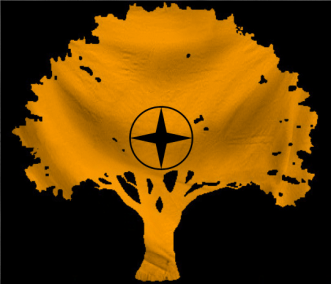 The Doom-Tree of Harndon is a gargantuan, cultured nation, ruled by Spokesperson Kariva Ulav with a fair hand, and notable for its daily referendums, soft-spoken computers, and rampant corporate plagiarism. The compassionate, democratic, cheerful population of 12.091 billion Harndonians love a good election, and the government gives them plenty of them. Universities tend to be full of students debating the merits of various civil and political rights, while businesses are tightly regulated and the wealthy viewed with suspicion.

The government — a sprawling, bureaucracy-choked, socially-minded morass — prioritizes Education, with Environment, Healthcare, and Welfare also on the agenda, while Defense receives no funds. It meets to discuss matters of state in the capital city of Quechkhonia. The average income tax rate is 99.1%.

The frighteningly efficient Harndonian economy, worth a remarkable 1,840 trillion Monalmes a year, is driven entirely by a combination of government and state-owned industry, with private enterprise illegal. The industrial sector, which is highly specialized, is mostly made up of the Tourism industry, with significant contributions from Information Technology and Book Publishing. Average income is an impressive 152,181 Monalmes, and distributed extremely evenly, with practically no difference between the richest and poorest citizens.

Museums stand half-empty as all foreign exhibits are returned to their countries of origin, the treehouse in Wyvern Park is the tallest building in Harndon, unemployed accountants keep double-entry ledgers of their benefit claims, and the 'kind of scrawny' 500 meter hurdle is a popular event. Crime is totally unknown, thanks to a capable police force and progressive social policies in education and welfare. Harndon's national animal is the Wyvern, which frolics freely in the nation's many lush forests.

Harndon is ranked 565th in the world and 4th in The Social Liberal Union for Most Advanced Public Education, scoring 28,594.22 on the Edu-tellignce® Test Score.