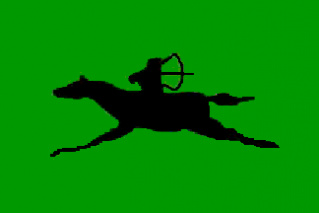 The Whirling Derwishes of
Halicarnassos
Inoffensive Centrist Democracy
note to self: must think for a motto...
Influence
Hermit
Founder
Region
The Past
Civil Rights
Below Average
Economy
Frightening
Political Freedom
Below Average

The Whirling Derwishes of Halicarnassos is a gargantuan, environmentally stunning nation, ruled by Some One with an even hand, and remarkable for its multi-spousal wedding ceremonies, frequent executions, and triple-decker prams. The hard-nosed, hard-working, humorless population of 26.504 billion Halicarnassosians have some civil rights, but not too many, enjoy the freedom to spend their money however they like, to a point, and take part in free and open elections, although not too often.

The medium-sized, corrupt government juggles the competing demands of Defense, Industry, and Law & Order. It meets to discuss matters of state in the capital city of Bodrum. The average income tax rate is 65.6%.

The frighteningly efficient Halicarnassosian economy, worth a remarkable 4,797 trillion Golds a year, is broadly diversified and led by the Arms Manufacturing industry, with major contributions from Information Technology, Tourism, and Door-to-door Insurance Sales. Black market activity is rampant. State-owned companies are reasonably common. Average income is an impressive 181,012 Golds, and evenly distributed, with the richest citizens earning only 4.0 times as much as the poorest.

A mountain of discarded sofas and beds is incinerated every day, the citizenship exam requires years of study to actually pass, the banshee wail foretells skies of death, and days begin with afternoon tea. Crime, especially youth-related, is totally unknown, thanks to a capable police force and progressive social policies in education and welfare. Halicarnassos's national animal is the Herodotos, which is also the nation's favorite main course, and its national religion is Banjectism.

Halicarnassos is ranked 4,124th in the world and 1st in The Past for Largest Soda Pop Sector, scoring 8,687.16 on the Addison-Fukk Productivity Rating.