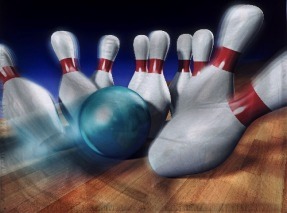 The Blessed Confederation of
Guardians of the Holy Bowling Alley
Right-wing Utopia
For God! For Glory! For Perfect Games!
Influence
Superpower
Steward of the Region and Defender of the Faith
Region
The Nation of Nations and Friends
Civil Rights
Rare
Economy
All-Consuming
Political Freedom
Below Average

Guardians of the Holy Bowling Alley

The Blessed Confederation of Guardians of the Holy Bowling Alley is a gargantuan, efficient nation, ruled by Sir Matthew Hallett with an even hand, and renowned for its deadly medical pandemics, public floggings, and avowedly heterosexual populace. The hard-nosed, hard-working, devout population of 19.416 billion Holy Bowlers are free to succeed or fail in life on their own merits; the successful tend to enjoy an opulent (but moralistic) lifestyle, while the failures can be seen crowding out most jails.

The medium-sized, moralistic government juggles the competing demands of Spirituality, Defense, and Industry. It meets to discuss matters of state in the capital city of The Holy Bowling Alley's Basement. Citizens pay a flat income tax of 16.5%.

The all-consuming Holy Bowler economy, worth a remarkable 1,969 trillion Bowling Balls a year, is fairly diversified and led by the Arms Manufacturing industry, with significant contributions from Automobile Manufacturing, Pizza Delivery, and Uranium Mining. Average income is an impressive 101,439 Bowling Balls, but there is a large disparity between incomes, with the richest 10% of citizens earning 503,935 per year while the poor average 11,551, a ratio of 43.6 to 1.

Newspapers are running a front-page picture of Sir Matthew Hallett holding a crowbar and standing over a bloodied stockbroker, Sir Matthew Hallett's told that love often manifests itself through homicidal four-lettered litanies, God took rock and roll from you, took rock and roll from everyone, and commemoration of the Great The Nation of Nations and Friends War costs almost as much as the war itself. Crime is a serious problem, with the police force struggling against a lack of funding and a high mortality rate. Guardians of the Holy Bowling Alley's national animal is the Phoenix, which teeters on the brink of extinction due to toxic air pollution, and its national religion is Romanicist Christianity.

Guardians of the Holy Bowling Alley is ranked 235,636th in the world and 5th in The Nation of Nations and Friends for Most Politically Apathetic Citizens, with 33.44 Whatever.