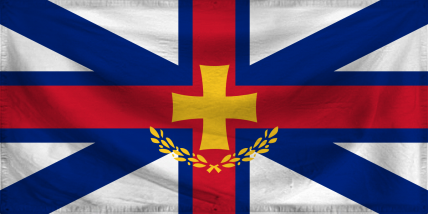 The Kingdom of Greater Niagara is a massive, efficient nation, ruled by HM King Matthew III with an even hand, and renowned for its museums and concert halls, triple-decker prams, and punitive income tax rates. The hard-nosed, hard-working, cynical, devout population of 3.645 billion Niagarans are highly moralistic and fiercely conservative, in the sense that they tend to believe most things should be outlawed. People who have good jobs and work quietly at them are lauded; others are viewed with suspicion.

The medium-sized, corrupt government juggles the competing demands of Law & Order, Defense, and Education. It meets to discuss matters of state in the capital city of Victoria. The average income tax rate is 70.0%.

The frighteningly efficient Niagaran economy, worth 507 trillion Niagaran Pound Sterlings a year, is broadly diversified and led by the Arms Manufacturing industry, with major contributions from Information Technology, Book Publishing, and Uranium Mining. Average income is an impressive 139,262 Niagaran Pound Sterlings, with the richest citizens earning 5.2 times as much as the poorest.

'To Regulate And Beyond' is the unofficial motto of the Niagaran Space Agency, major polluting industries have painted a lot of their machines green to give an impression of caring about the environment, teenage girls in knee-length surfer shorts have become a cultural icon of Greater Niagara, and economics is a shrinking field. Crime, especially youth-related, is totally unknown, thanks to a well-funded police force and progressive social policies in education and welfare. Greater Niagara's national animal is the Lion, which teeters on the brink of extinction due to widespread deforestation, and its national religion is The Christian Church of Niagara.

Greater Niagara is ranked 88,054th in the world and 36th in Republic of Conservative Nations for Greatest Rich-Poor Divides, with 5.21 Rich To Poor Income Ratio.

Most Recent Government Activity: 110 minutes ago