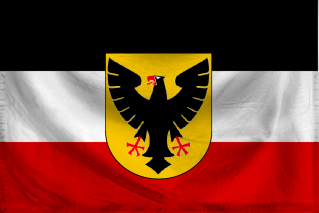 The Reich of Greater Germany is a gargantuan, efficient nation, ruled by Kaiserin Elsa von Hohensteiner with an even hand, and notable for its complete lack of prisons, unlimited-speed roads, and devotion to social welfare. The compassionate, cheerful population of 17.573 billion Germans have some civil rights, but not too many, enjoy the freedom to spend their money however they like, to a point, and take part in free and open elections, although not too often.

The relatively small, corrupt government juggles the competing demands of Education, Defense, and Administration. It meets to discuss matters of state in the capital city of Adlerhorst. The average income tax rate is 19.2%, but much higher for the wealthy.

The frighteningly efficient German economy, worth a remarkable 3,821 trillion Reichsmarks a year, is quite specialized and led by the Information Technology industry, with significant contributions from Tourism, Book Publishing, and Arms Manufacturing. State-owned companies are common. Average income is an amazing 217,442 Reichsmarks, and evenly distributed, with the richest citizens earning only 3.0 times as much as the poorest.

Minorities play dumb to get more welfare payments, overhead luggage compartments on planes sometimes conceal dimunitive intelligence officers, the mentally ill are given high powered automatic weapons for "catharsis therapy", and the navy's new flotilla is gonna be a thrilla. Crime, especially youth-related, is totally unknown. Greater Germany's national animal is the eagle, which soars majestically through the nation's famously clear skies, and its national religion is Wotanism.

Greater Germany is ranked 1,341st in the world and 1st in The Reich for Largest Publishing Industry, scoring 31,015.3 on the Bella Potter Productivity e-Index.