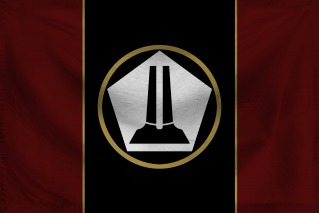 Daniel Zelevas is one of the Masters of the True Infinity and the immortal ruling Monarch of the Supreme Imperium of Great Redanien and the Imperial Worlds of the Zarodon Realm, and is described by the Imperial Inquisition and the Church of the Infinity as the Guardian, Father and Infinite Master of Great Redanien. According to scientists and professionals, Daniel Zelevas was born as a human and later he was visited by the True Infinity, , who gave him immense power of unknown source. His main plane of the Zarodon realm is known as

Great Redanien (Though also called "Supreme Zarodon Realm" or "Großredanien" in German), and consists of several giant landmasses surrounded by a group of smaller islands, and is divided into two halves: Nibelungen and Rheingold, with the bright highlands as Nibelungen and the dark lowlands as Rheingold. Great Redanien cannot be measured in size, because Zarodon, where Great Redanien lies within, can be expanded infinitely on demand by Daniel Zelevas.

The northern highlands of Nibelungen consist of verdant fields with brightly colored plants and beautiful trees, snow mountains and waterfalls, and represents the lighter side of Daniel Zelevas. They are inhabited by calm, cheerful citizens, whimsical revelers and friendly artists. Meanwhile, the dark lowlands of Rheingold is coloured with black soil, and ominous blue and purple plants, etc., and represents the darker side of Daniel Zelevas. They are inhabited by violent, sadist citizens, hedonists and delirious couples having sex all day. Each half is ruled by a duke, with Daniel Zelevas himself residing in the Capital City of Sankt Wolfgang, ruling over both Nibelungen and Rheingold as King.

Zarodon is classified as an infinite dimensional void which encompasses all possibility and contains an endless number of individual (permanent and/or temporal) realms. Zarodon has been originally created by the True Infinity and later then transferred to Daniel Zelevas to create his very own realms for whatever reason humankind does not know. There is a possibility that Daniel Zelevas has already created countless realms in Zarodon, but humankind had only the privilege to visit the main plane of Zarodon: Great Redanien. Zarodon is ruled by Daniel Zelevas. So he has absolute power within his is own realms in Zarodon, and in Zarodon as a whole. So only Daniel Zelevas chooses who might be worthy to enter Zarodon and with that one or more of his realms. It is known that Zarodon has multiple gates around the multiverse an it's worlds. In cases of crime, the most punishment they face is permament exile frome the Imperium and the Zarodon realm. It can also be degrading to slave status or execution.

Due to the fact that Great Redanien and some other of the realms in Zarodon are demon realms (bright and/or dark), a human cannot survive in this realms, because the air is corrupted with demonic mana, which eventually leads to transformation (incubus if male, succubus if female). The transformation can be cancelled if the human timely reaches a portal or gate to his place of origin. Also, the highest ranking of monsters in service of Daniel Zelevas or his subordinates can freely change the transformation, which leads that the targeted human transforms into another monster (ex: Ogre, Slime, Werewolf). It is known that Daniel Zelevas is, with the powers of the true infinity and the artifacts of the eternal guardians, one of the strongest being in existence.

Existence: Inside of Zarodon. Mostly in his main realm of Great Redanien.

Range: High Outerversal (Can reach the very depths of the true infinity)

Intelligence: Nigh-Omniscient (Has access to the wisdom of the true infinity)

Weaknesses: He depends on the laws of the true infinity.

For more information about powers and stats visit:

The Supreme Imperium of Great Redanien