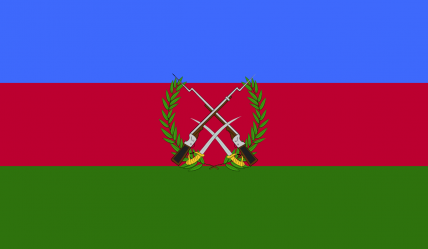 The Federal Republic of Great Lutharia is a massive, safe nation, ruled by Baldur Hirschl with an even hand, and remarkable for its barren, inhospitable landscape, compulsory military service, and irreverence towards religion. The hard-nosed population of 1.602 billion Great Lutharians are fiercely patriotic and enjoy great social equality; they tend to view other, more capitalist countries as somewhat immoral and corrupt.

The medium-sized government prioritizes Defense, with Education, Industry, and Administration also on the agenda, while International Aid and Spirituality receive no funds. It meets to discuss matters of state in the capital city of Ilhaveia. The average income tax rate is 31.9%, but much higher for the wealthy.

The Great Lutharian economy, worth 92.7 trillion Luths a year, is fairly diversified and led by the Arms Manufacturing industry, with major contributions from Uranium Mining, Beef-Based Agriculture, and Basket Weaving. Black market activity is notable. State-owned companies are common. Average income is 57,861 Luths, and distributed extremely evenly, with little difference between the richest and poorest citizens.

Children are brainwashed at a young age to accept "love and peace!" as a way of life, business owners return from long vacations to find their factories have been turned into homeless shelters, cremation is compulsory for the deceased, and geosynchronous satellites are now manned by unpaid interns. Crime, especially youth-related, is totally unknown. Great Lutharia's national animal is the Swan, which teeters on the brink of extinction due to widespread deforestation.

Great Lutharia is ranked 37,474th in the world and 39th in Coalition of Crown Albatross for Most Valuable International Artwork, with 4.73 Bank.