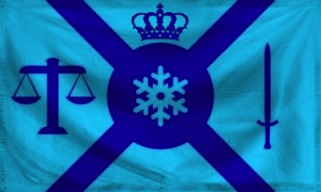 The Viceroyalty of Great-Imperialonia is a gargantuan, socially progressive nation, ruled by Viceroy Melas II de Mons Sansiers with an even hand, and notable for its pith helmet sales, ubiquitous missile silos, and devotion to social welfare. The compassionate, democratic, humorless population of 13.417 billion Imperialonians have some civil rights, but not too many, enjoy the freedom to spend their money however they like, to a point, and take part in free and open elections, although not too often.

The enormous, corrupt government juggles the competing demands of Defense, Education, and Law & Order. It meets to discuss matters of state in the capital city of Frosto. The average income tax rate is 91.9%, and even higher for the wealthy.

The frighteningly efficient Imperialonian economy, worth a remarkable 1,663 trillion Royal Dutch Florins a year, is quite specialized and led by the Information Technology industry, with major contributions from Tourism, Arms Manufacturing, and Book Publishing. State-owned companies are common. Average income is an impressive 123,991 Royal Dutch Florins, and distributed extremely evenly, with little difference between the richest and poorest citizens.

On-duty Air Great-Imperialonia flight attendants are usually seen napping in first class, large-girthed charity workers assign themselves healthy wages for their work with starving children, the nation's navy has been named the scourge of the seven thousand seas, and napalm is the tool of choice for disabling eco-unfriendly forestry operations. Crime is totally unknown, thanks to a very well-funded police force and progressive social policies in education and welfare. Great-Imperialonia's national animal is the Polar bear, which frolics freely in the nation's many lush forests.

Great-Imperialonia is ranked 82,023rd in the world and 72nd in The Western Isles for Highest Wealthy Incomes, with 146,211 Standard Monetary Units.