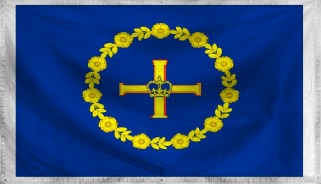 The Imperial Federation of Ghearmain is a gargantuan, cultured nation, ruled by Risteard III with an even hand, and renowned for its museums and concert halls, ubiquitous missile silos, and unlimited-speed roads. The hard-nosed, hard-working, humorless, devout population of 16.885 billion Ghearmanaigh have some civil rights, but not too many, enjoy the freedom to spend their money however they like, to a point, and take part in free and open elections, although not too often.

The tiny, corrupt government is primarily concerned with Defense, although Law & Order, Education, and Administration are also considered important, while Welfare and Social Policy are ignored. It meets to discuss matters of state in the capital city of Caipitil chathair. Income tax is unheard of.

The frighteningly efficient Ghearmanach economy, worth a remarkable 5,684 trillion Crowns a year, is broadly diversified and led by the Arms Manufacturing industry, with major contributions from Retail, Book Publishing, and Uranium Mining. Black market activity is frequent. Average income is an amazing 336,688 Crowns, but there is a large disparity between incomes, with the richest 10% of citizens earning 1,296,992 per year while the poor average 60,116, a ratio of 21.6 to 1.

Older citizens lament over the loss of law and order, the saying 'break a leg' is now taken literally, the Ghearmain Automotive Racing Series draws millions of spectators annually while those near the tracks complain about the noise, and foreign musicians that Risteard III dislikes are turned away at the border. Crime, especially youth-related, is totally unknown, thanks to a capable police force. Ghearmain's national animal is the Leon, which teeters on the brink of extinction due to widespread deforestation, and its national religion is Catholicism.

Ghearmain is ranked 2,529th in the world and 84th in Osiris for Largest Arms Manufacturing Sector, scoring 47,608.04 on the Charon Conveyancy Index.