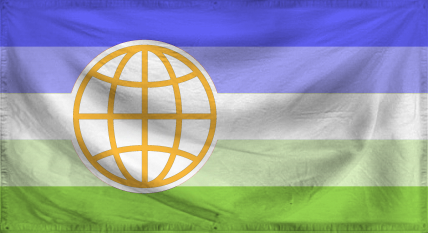 The Dominion of Geopolity is a gargantuan, environmentally stunning nation, notable for its state-planned economy, absence of drug laws, and punitive income tax rates. The hard-nosed, democratic population of 18.328 billion Geopolityians are fiercely patriotic and enjoy great social equality; they tend to view other, more capitalist countries as somewhat immoral and corrupt.

The enormous, socially-minded government juggles the competing demands of Welfare, Law & Order, and Education. The average income tax rate is 58.3%, and even higher for the wealthy.

The large but inefficient Geopolityian economy, worth 641 trillion geos a year, is driven entirely by a combination of government and state-owned industry, with private enterprise illegal. The industrial sector, which is quite specialized, is led by the Arms Manufacturing industry, with major contributions from Automobile Manufacturing, Information Technology, and Trout Farming. Average income is 34,986 geos, and distributed extremely evenly, with little difference between the richest and poorest citizens.

Crime, especially youth-related, is totally unknown, thanks to a well-funded police force and progressive social policies in education and welfare. Geopolity's national animal is the polity, which frolics freely in the nation's many lush forests.

Geopolity is ranked 120,854th in the world and 73rd in Geopolity for Smartest Citizens, with 30.43 quips per hour.