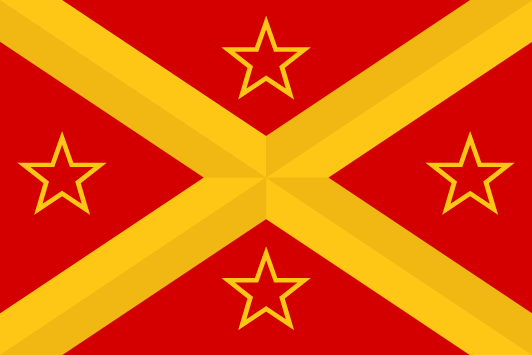 The Commonwealth of Gaeslan 706 is a colossal, orderly nation, notable for its state-planned economy, irreverence towards religion, and stringent health and safety legislation. The cynical population of 8.634 billion Gaeslan 706ians are ruled with an iron fist by the socialist government, which grants its people the freedom to do whatever they like so long as it doesn't involve getting richer than anybody else or challenging the government.

The large, socially-minded, well-organized government juggles the competing demands of Law & Order, Defense, and Welfare. The average income tax rate is 46.4%, but much higher for the wealthy.

The sizeable but stagnant Gaeslan 706ian economy, worth 93.9 trillion kronor a year, is driven entirely by a combination of government and state-owned industry, with private enterprise illegal. However, for those in the know, there is a slick, highly efficient, quite specialized black market in Trout Farming, Cheese Exports, Soda Sales, and Basket Weaving. The private sector mostly consists of enterprising ten-year-olds selling lemonade on the sidewalk, but the government is looking at stamping this out. Average income is 10,873 kronor, and distributed extremely evenly, with practically no difference between the richest and poorest citizens.

Crime is totally unknown, thanks to a well-funded police force and progressive social policies in education and welfare. Gaeslan 706's national animal is the gyrfalcon, which soars majestically through the nation's famously clear skies.