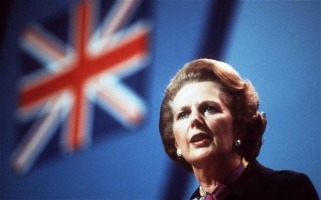 The United Kingdom of Futuo is a gargantuan, cultured nation, ruled by Arfur Daley with an even hand, and notable for its barren, inhospitable landscape, keen interest in outer space, and pith helmet sales. The hard-nosed, hard-working, humorless population of 11.377 billion Futuoans are either ruled by a sleek, efficient government or a conglomerate of multinational corporations; it's difficult to tell which.

The frighteningly efficient Futuoan economy, worth a remarkable 2,374 trillion quid a year, is driven almost entirely by the private sector, which is broadly diversified and led by the Retail industry, with major contributions from Arms Manufacturing, Information Technology, and Automobile Manufacturing. Average income is an amazing 208,744 quid, and evenly distributed, with the richest citizens earning only 3.4 times as much as the poorest.

Extraordinary rendition is nothing out of the ordinary, minor parties are virtually absent in Parliament, crime suspects are forced to submit to blood testing, and tipsy fans frequently invite themselves to the board meetings of sports clubs. Crime, especially youth-related, is totally unknown. Futuo's national animal is the Shark, which is also the nation's favorite main course.

Futuo is ranked 4,427th in the world and 75th in the West Pacific for Most Corrupt Governments, with 190.94 kickbacks per hour.

Papercuts and Skittles, and