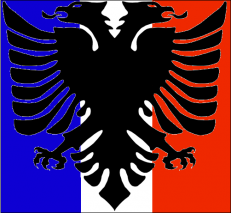 The Exarchate of French Albania is a gargantuan, environmentally stunning nation, ruled by Seraphin Makroleon with an iron fist, and renowned for its museums and concert halls, ubiquitous missile silos, and compulsory vegetarianism. The hard-nosed, cynical, humorless population of 14.51 billion Arbanians are ruled with an iron fist by the dictatorship government, which ensures that no-one outside the party gets too rich. In their personal lives, however, citizens are relatively unoppressed; it remains to be seen whether this is because the government genuinely cares about its people, or if it hasn't gotten around to stamping out civil rights yet.

The medium-sized, corrupt, well-organized government juggles the competing demands of Education, Administration, and Defense. It meets to discuss matters of state in the capital city of Agde. The average income tax rate is 94.3%.

The frighteningly efficient Arbanian economy, worth a remarkable 6,740 trillion freks a year, is driven entirely by a combination of government and state-owned industry, with private enterprise illegal. However, for those in the know, there is an enormous, deeply entrenched black market in Information Technology, Arms Manufacturing, Book Publishing, and Tourism. The private sector mostly consists of enterprising ten-year-olds selling lemonade on the sidewalk, but the government is looking at stamping this out. Average income is an amazing 464,515 freks, and distributed extremely evenly, with little difference between the richest and poorest citizens.

Student exchange programs are in trouble as everyone wants to leave but no-one wants to come, high-income earners pay a 100% tax rate, excessive wheelchair ramps on government buildings have been compared to theme park attractions, and builders across French Albania are blocked up with orders for new public loos. Crime, especially youth-related, is totally unknown. French Albania's national animal is the Kairosean Eagle, which soars majestically through the nation's famously clear skies, and its national religion is The Massilian Mysteries.

French Albania is ranked 17th in the world and 1st in Wintreath for Largest Information Technology Sector, scoring 188,577.92 on the Fann-Boi Productivity Index.