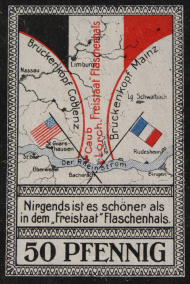 The Historical Measurement Error of Freistaat Flaschenhals is a gargantuan, orderly nation, notable for its lack of airports, ritual sacrifices, and national health service. The hard-nosed, cynical, humorless population of 22.557 billion Freistaat Flaschenhalsians are ruled with an iron fist by the dictatorship government, which ensures that no-one outside the party gets too rich. In their personal lives, however, citizens are relatively unoppressed; it remains to be seen whether this is because the government genuinely cares about its people, or if it hasn't gotten around to stamping out civil rights yet.

The large, corrupt government juggles the competing demands of Social Policy, Industry, and Education. It meets to discuss matters of state in the capital city of Lorch. The average income tax rate is 77.2%, and even higher for the wealthy.

The powerhouse Freistaat Flaschenhalsian economy, worth a remarkable 3,594 trillion Freistaattalers a year, is driven entirely by a combination of government and state-owned industry, with private enterprise illegal. However, for those in the know, there is an enormous, deeply entrenched, fairly diversified black market in Arms Manufacturing, Uranium Mining, Tourism, and Retail. The private sector mostly consists of enterprising ten-year-olds selling lemonade on the sidewalk, but the government is looking at stamping this out. Average income is an impressive 159,370 Freistaattalers, and distributed extremely evenly, with little difference between the richest and poorest citizens.

The nation is reliant on the principle of mutually assured destruction to maintain its security, voters who forget their name are given a hint, government officials raid public buildings to remove all mention of G*d or r******n, and children as young as twelve are conscripted into the armed forces. Crime is totally unknown, thanks to a well-funded police force and progressive social policies in education and welfare. Freistaat Flaschenhals's national animal is the Schwein, which frolics freely in the nation's many lush forests.

Freistaat Flaschenhals is ranked 49,156th in the world and 2nd in Real Places for Largest Cheese Export Sector, scoring 3,951.29 on the Mozzarella Productivity Index.