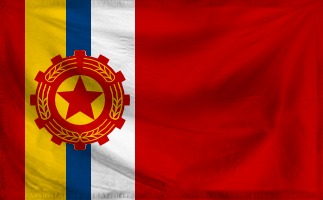 The Culture of
Free Socialism
Left-wing Utopia
Of each according to ability to each according to need.
Influence
Superpower
Region
Anticapitalist Alliance
Civil Rights
Superb
Economy
Frightening
Political Freedom
Excessive

The Culture of Free Socialism is a gargantuan, cultured nation, ruled by a loose-knit group of concerned Minds with a fair hand, and notable for its anti-smoking policies, complete lack of prisons, and irreverence towards religion. The compassionate, democratic, cheerful population of 37.773 billion Culture citizens are free to do what they want with their own bodies, and vote for whomever they like in elections; if they go into business, however, they are regulated to within an inch of their lives.

The large, liberal, socially-minded, outspoken government prioritizes Education, with Social Policy, Healthcare, and Welfare also on the agenda, while Spirituality and Administration receive no funds. It meets to discuss matters of state in the capital city of Free Socialism Orbital. The income tax rate is 100%.

The frighteningly efficient Culture economy, worth an astonishing 20,970 trillion resources a year, is driven entirely by a combination of government and state-owned industry, with private enterprise illegal. The industrial sector, which is quite specialized, is led by the Information Technology industry, with significant contributions from Book Publishing, Tourism, and Arms Manufacturing. Average income is a breathtaking 555,168 resources, and distributed extremely evenly, with practically no difference between the richest and poorest citizens.

The Smalltopian embassy doubles as an electoral campaign headquarters, flags are commonly used as bonfire kindling, billions of resources are being blown on orbital weapons development, and cutting-edge missile systems are being retrofitted to twin-prop air force biplanes. Crime is totally unknown, thanks to a capable police force and progressive social policies in education and welfare. Free Socialism's national animal is the Worker Ant, which frolics freely in the nation's many lush forests, and its national religion is atheism.

Free Socialism is ranked 19th in the world and 1st in Anticapitalist Alliance for Most Cheerful Citizens, with 99.08 Percentage Of Water Glasses Perceived Half-Full.