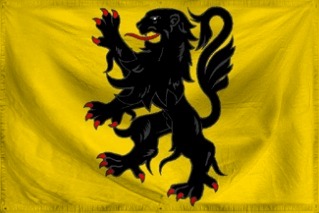 The Glorious Kingdom of Flanderlion is a gargantuan, efficient nation, ruled by Dale Flanderlion with an iron fist, and remarkable for its free-roaming dinosaurs, anti-smoking policies, and lack of airports. The hard-nosed, hard-working, cynical, humorless, devout population of 14.117 billion Flanderlionians are kept under strict control by the oppressive government, which measures its success by the nation's GDP and refers to individual citizens as "human resources."

The medium-sized, corrupt, moralistic, well-organized government is primarily concerned with Defense, with Law & Order, Administration, and Industry also on the agenda, while Social Policy and Welfare are ignored. It meets to discuss matters of state in the capital city of Flanderlion Fortress. The average income tax rate is 99.4%.

The frighteningly efficient Flanderlionian economy, worth an astonishing 10,038 trillion denarii a year, is driven entirely by a combination of government and state-owned industry, with private enterprise illegal. However, for those in the know, there is an enormous, deeply entrenched, broadly diversified black market in Arms Manufacturing, Information Technology, Uranium Mining, and Woodchip Exports. The private sector mostly consists of enterprising ten-year-olds selling lemonade on the sidewalk, but the government is looking at stamping this out. Average income is a breathtaking 711,066 denarii, and evenly distributed, with the richest citizens earning only 3.7 times as much as the poorest.

International terrorists often get their weapons supply in Flanderlion, soldiers' positions are given away by the glint of their bayonets, it takes months to get the proper permits for a child's first tricycle, and Flanderlion has one of the largest offshore wind farms in the world. Crime, especially youth-related, is totally unknown, thanks to a capable police force and progressive social policies in education and welfare. Flanderlion's national animal is the Flanderlion, which teeters on the brink of extinction due to widespread deforestation, and its national religion is Dale Flanderlionianism.

Flanderlion is ranked 136,747th in the world and 6,263rd in the Pacific for Most Income Equality, scoring 27.05 on the Marx-Engels Emancipation Scale.