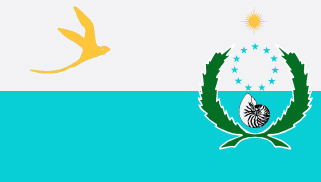 The Serene Paradise of Exaequatio is a gargantuan, genial nation, ruled by Prime Minister Dr Julian Fontaine with a fair hand, and notable for its avant-garde cinema, compulsory vegetarianism, and free-roaming dinosaurs. The compassionate, democratic population of 11.011 billion Exaequations are free to do what they want with their own bodies, and vote for whomever they like in elections; if they go into business, however, they are regulated to within an inch of their lives.

The medium-sized, liberal, outspoken government juggles the competing demands of Education, Environment, and Industry. It meets to discuss matters of state in the capital city of Libertà. The average income tax rate is 73.1%, and even higher for the wealthy.

The frighteningly efficient Exaequatioan economy, worth a remarkable 1,574 trillion Quatios a year, is quite specialized and led by the Tourism industry, with major contributions from Information Technology and Book Publishing. State-owned companies are common. Average income is an impressive 142,974 Quatios, and distributed extremely evenly, with little difference between the richest and poorest citizens.

New pilots are regularly reminded that they are more expendable than their planes, people can't decide between preserving forests and buying print copies of 'Dogman Versus The Giggler', science centers and state of the art laboratories are ubiquitous, and running away is an essential part of the elite forces' hand-to-hand training. Crime is totally unknown. Exaequatio's national animal is the Hyacinth Macaw, which soars majestically through the nation's famously clear skies.

Exaequatio is ranked 40,328th in the world and 5th in Cinderia for Most Influential, scoring 678 on the Soft Power Disbursement Rating.