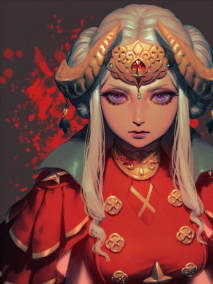 The Dark Imperium of Eucrsia is a massive, orderly nation, ruled by Grand Emperor Rax Macvn with an iron fist, and notable for its teetotalling pirates, prohibition of alcohol, and ritual sacrifices. The hard-nosed, cynical population of 2.865 billion Eucrsians are ruled without fear or favor by a psychotic dictator, who outlaws just about everything and refers to the populace as "my little playthings."

The enormous, corrupt, moralistic, socially-minded, well-organized government juggles the competing demands of Defense, Law & Order, and Administration. It meets to discuss matters of state in the capital city of Eucrsia. The average income tax rate is 74.9%, and even higher for the wealthy.

The large but inefficient Eucrsian economy, worth 121 trillion Delta eagles a year, is driven entirely by a combination of government and state-owned industry, with private enterprise illegal. However, for those in the know, there is a slick, highly efficient, highly specialized black market in Trout Farming, Furniture Restoration, and Gambling. The private sector mostly consists of enterprising ten-year-olds selling lemonade on the sidewalk, but the government is looking at stamping this out. Average income is 42,552 Delta eagles, and distributed extremely evenly, with practically no difference between the richest and poorest citizens.

The line of people waiting for a visa interview in front of foreign embassies is typically a mile long, the government baselessly accuses foreign dignitaries of being assassins, the government is more interested in identifying problems than fixing them, and businesses are scrambling to adapt to the government's mandate that 'time and measurement no longer exist'. Crime, especially youth-related, is totally unknown, thanks to the all-pervasive police force and progressive social policies in education and welfare. Eucrsia's national animal is the Imperial Eagle, which soars majestically through the nation's famously clear skies.

Eucrsia is ranked 231,452nd in the world and 4,228th in Alliance of Supreme Powers for Largest Manufacturing Sector, scoring 613.73 on the Gooback-Jerbs Productivity Index.