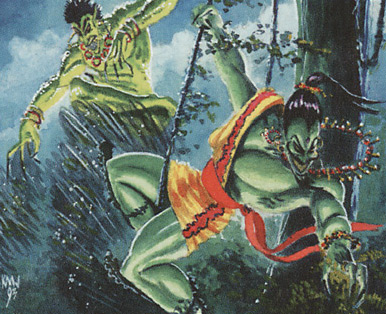 The Green Power of Erhnam Djinn is a gargantuan, environmentally stunning nation, ruled by Its Controller with an even hand, and renowned for its museums and concert halls, enslaved workforce, and rampant corporate plagiarism. The hard-nosed, hard-working, cheerful, devout population of 19.718 billion Erhnam Djinnians have some civil rights, but not too many, enjoy the freedom to spend their money however they like, to a point, and take part in free and open elections, although not too often.

The enormous government juggles the competing demands of Environment, Education, and Spirituality. It meets to discuss matters of state in the capital city of of Brass. Citizens pay a flat income tax of 75.4%.

The Erhnam Djinnian economy, worth a remarkable 1,360 trillion green manas a year, is highly specialized and led by the Tourism industry, with major contributions from Book Publishing and Gambling. Black market activity is rampant. State-owned companies are reasonably common. Average income is 68,979 green manas, but there is a significant disparity between incomes, with the richest 10% of citizens earning 198,340 per year while the poor average 19,065, a ratio of 10.4 to 1.

Hundreds of subterranean tunnels are being built as part of "Project Morlock", Its Controller's family members carry literal get-out-of-jail-free cards, families waiting for delayed pipe installations hope daily for rain, and the official Erhnam Djinnian Phrase Book weighs as much as a small child. Crime, especially youth-related, is all-pervasive, probably because of the absence of a police force. Erhnam Djinn's national animal is the Llanowar Elf, which frolics freely in the nation's many lush forests.

Erhnam Djinn is ranked 55,449th in the world and 132nd in Forest for Highest Wealthy Incomes, with 198,341 Standard Monetary Units.