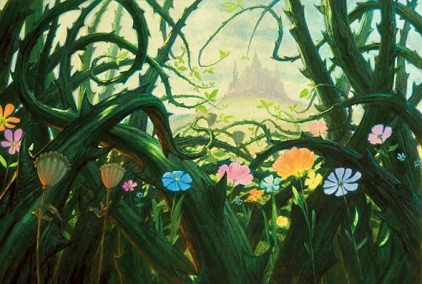 The Wilderness of Eloren is a colossal, environmentally stunning nation, notable for its infamous sell-swords, daily referendums, and punitive income tax rates. The compassionate, democratic, cheerful population of 9.401 billion Eloren are free to do what they want with their own bodies, and vote for whomever they like in elections; if they go into business, however, they are regulated to within an inch of their lives.

The large, socially-minded, outspoken government juggles the competing demands of Education, Administration, and Environment. It meets to discuss matters of state in the capital city of the Unbound Glade. The average income tax rate is 99.7%.

The frighteningly efficient Eloren economy, worth a remarkable 2,612 trillion pods a year, is driven entirely by a combination of government and state-owned industry, with private enterprise illegal. The industrial sector, which is quite specialized, is led by the Information Technology industry, with significant contributions from Book Publishing, Tourism, and Basket Weaving. Average income is an amazing 277,930 pods, and distributed extremely evenly, with practically no difference between the richest and poorest citizens.

The amount welfare recipients spend on fertilizer has exploded, the election for Leader's office's janitor is heating up, the state considers itself the 'third parent' of every child in the nation, and they who do not work shall not eat. Crime, especially youth-related, is totally unknown. Eloren's national animal is the triffid, which frolics freely in the nation's many lush forests, and its national religion is nature worship.

Eloren is ranked 220,118th in the world and 350th in The Leftist Assembly for Largest Insurance Industry, scoring -9.4 on the Risk Expulsion Effectiveness Rating.