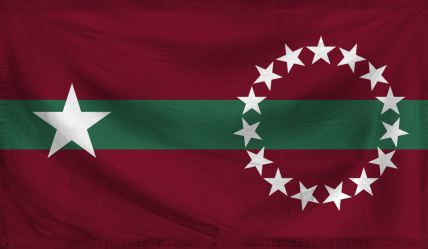 The Allied States of Elbresia is a huge, efficient nation, notable for its burgeoning sheep population. The hard-nosed, hard-working, devout population of 879 million Elbresians are either ruled by a sleek, efficient government or a conglomerate of multinational corporations; it's difficult to tell which.

The relatively small government prioritizes Spirituality, although Law & Order, Industry, and Education are also considered important, while International Aid is ignored. It meets to discuss matters of state in the capital city of Allengin. Citizens pay a flat income tax of 12.3%.

The thriving Elbresian economy, worth 60.3 trillion pounds a year, is broadly diversified and led by the Book Publishing industry, with major contributions from Pizza Delivery, Gambling, and Arms Manufacturing. Average income is 68,549 pounds, with the richest citizens earning 7.6 times as much as the poorest.

Sleep-deprived officials are known to collapse after late night revision for their examinations, breast milk lattes are the newest fad among hip urbanites, murderers with law degrees can be seen swinging the gavel in courts, and prisons are filled with the cackles and sobs of a deranged inmate population. Crime, especially youth-related, is moderate. Elbresia's national animal is the sheep, which can occasionally be seen sifting through garbage in the nation's cities.

Elbresia is ranked 53,324th in the world and 75th in Coalition of Crown Albatross for Most Valuable International Artwork, with 2.78 Bank.