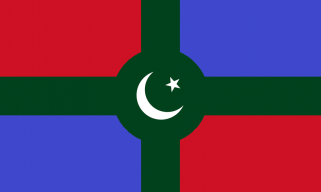 The Imperial Commonwealth of Eastfield Lodge is a gargantuan, cultured nation, ruled by King Iqbal II with an even hand, and remarkable for its state-planned economy, complete lack of prisons, and free-roaming dinosaurs. The compassionate, cheerful, devout population of 28.433 billion Eastfielders are fiercely patriotic and enjoy great social equality; they tend to view other, more capitalist countries as somewhat immoral and corrupt.

The government — a sprawling, bureaucracy-choked, socially-minded morass — juggles the competing demands of Education, Law & Order, and Environment. It meets to discuss matters of state in the capital city of Lodgertia. The income tax rate is 100%.

The frighteningly efficient Eastfielder economy, worth an astonishing 10,442 trillion Fishfingers a year, is driven entirely by a combination of government and state-owned industry, with private enterprise illegal. The industrial sector, which is extremely specialized, is mostly made up of the Information Technology industry, with significant contributions from Book Publishing. Average income is an amazing 367,261 Fishfingers, and distributed extremely evenly, with practically no difference between the richest and poorest citizens.

Taking hostages is a great way to influence government policy, EL-SPAN viewership drops as MPs act their age, pretending to be prejudiced is a good way to get out of jury duty, and 100-year-old politicians are now a thing of the past. Crime, especially youth-related, is totally unknown, thanks to the all-pervasive police force and progressive social policies in education and welfare. Eastfield Lodge's national animal is the digitalis-tailed lion, which frolics freely in the nation's many lush forests, and its national religion is Islam.

Eastfield Lodge is ranked 215,061st in the world and 98th in Rushmore for Largest Automobile Manufacturing Sector, scoring -63.39 on the Henry Ford Productivity Index.